Judea & Samaria in a Glimpse

WHAT is Judea & Samaria?

J&S, is the geographical region that you will find on a map of Israel that looks like a ‘kidney bean.’ Mainstream media often refer to it as the ‘West Bank’, despite the fact that name originated only after Jordan illegally occupied the region from 1949-1967 and they wanted to distinguish their new territory from Jordan proper which is located on the eastern bank of the Jordan River. 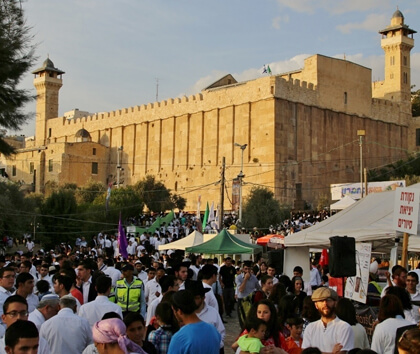 The term Judea has historically been used to refer to the region just south of Jerusalem. Samaria has historically been used to refer to the mountainous region just north of Jerusalem. The term Judea comes from the tradition that the Jewish tribe of Judah inhabited the portion of land to the south of Jerusalem, while the Samaritans were a sect that lived during Biblical times in the mountainous region north of Jerusalem. The terms Judea & Samaria can be found in the writings of travelers to the region during the Middle Ages. And in more recent times, the League of Nations and even the United Nations always used the terms Judea and Samaria to describe the region in official documents through 1949.

The region is comprised of four cities, six counties and 15 smaller municipalities each with their own mayor and city/county council like in any municipality throughout Israel.

Altogether, less than 2% of Judea & Samaria has been developed by Israel. 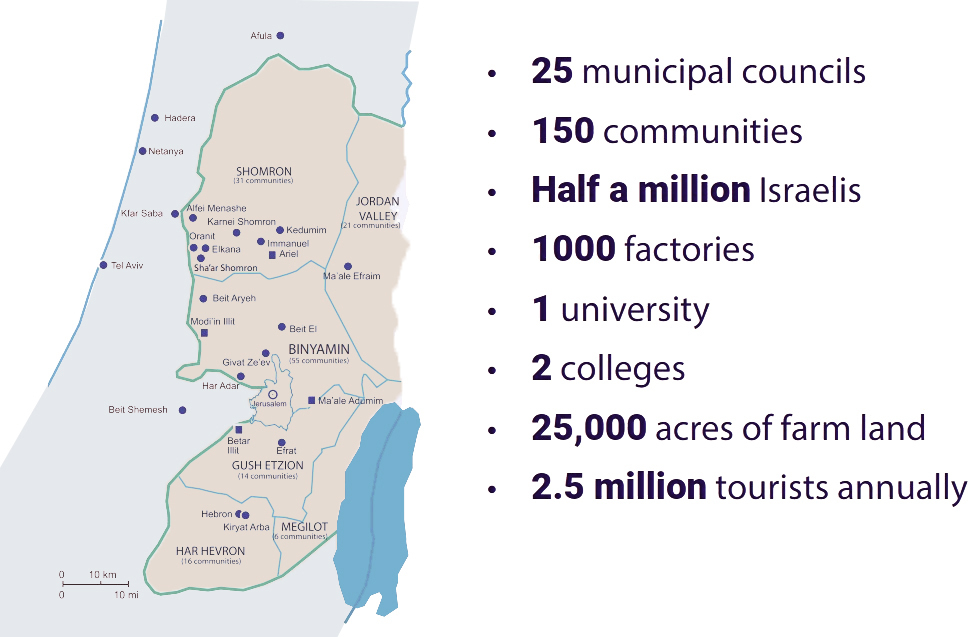 WHERE is Judea & Samaria? 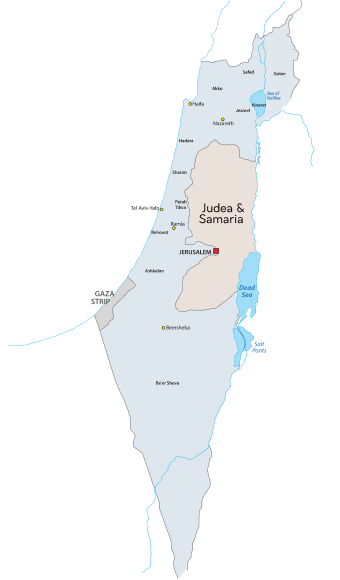 J&S can be found in the center of Israel along its eastern border with Jordan. However, its central location makes it a critical strategic asset, without it, Israel will be extremely vulnerable. Israel barely survived that exact reality that it experienced from 1949-1967 when it finally drove away its enemies who used the J&S’s strategic highlands to terrorize central Israel.

The area encompasses the southern and northern suburbs of Jerusalem, those to the east of Tel Aviv with the Jordan River as its border to the east. It includes Israel's central mountain range, and at 1,100 meters above sea level, it overlooks Israel’s largest population center in Tel-Aviv, as well as Israel’s only international airport.

At its narrowest point, Netanya, a city on the Mediterranean beach is a mere 9 miles away from J&S.

The Tel Aviv coast is a mere 11-mile drive to J&S.

Israel’s international airport is just 4 miles away from J&S.

WHO are the Israeli residents of Judea & Samaria?

The Israeli residents of Judea & Samaria (J&S) live in communities that range from urban, to suburban to rural. They are small business owners, teachers, social workers, entrepreneurs, stay at home moms, etc. Many were raised in a J&S community and have chosen to raise their own families in the tight communities that J&S is known for. Some made Aliyah, moved from a foreign country directly to J&S, while others can count 4 generations of J&S residents in one family.

They do not resemble the broad (typically negative) stereotypes of them, that can be found throughout mainstream media.

AFJS is committed to presenting the 491,923 (as of January 2022) residents of J&S accurately and allowing the world to see them for what they really are. 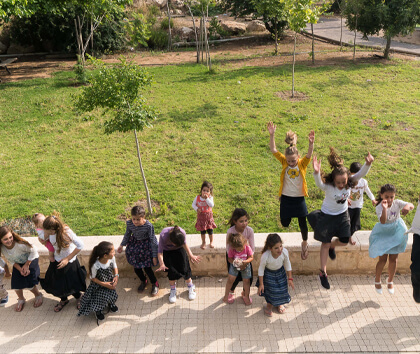 WHEN did Jews live in Judea & Samaria?

Did you know that Jews have not only yearned to, but have actually lived throughout YESHA (Judea & Samaria) for the past 4000 years?

Jews have been living in the regions of J&S since Biblical times. In fact, when the Bible records the first place that G-d spoke to Abraham in the land and where he promised the Land as an everlasting covenant was in Elon Moreh in Samaria (Genesis 12:7). Jacob had his famous dream in Beit El, and the forefathers and mothers were buried in Hebron.

The Biblical stories of the Hebrew Bible take place almost exclusively in the mountains of Judea and Samaria, in cities such as Shechem, Elon Moreh, Beit El, Kiryat Arba, Beit Lechem, Efrata, Hebron, among others.

After the exodus from Egypt, the Jewish people establish their capital in Shilo where they erected the Tabernacle, the precursor to the Temple in Jerusalem. King David’s kingdom was established in the hills of Hebron. Centuries later when the destruction of the temple took place the prophet records that Jews could view the flames of the burning temple from the Herodian palace in Gush Etzion, and most of the battles of the Maccabees against the Greeks (Hanukah story) took place in the hills of Judea & Samaria.

Throughout the last 2,000 of the Jewish exile, Jews have maintained their connection to the region, from a vibrant society of Cohanim (priests) who lived in Sussiya from the 4th Century until they mysteriously disappeared in the 8th century; as well as recorded pilgrimages of Jewish leaders such as the Rambam (Maimonides) to Hebron in 1165.

In more recent times, as a child, Israel’s second Prime Minister, Moshe Sharrett lived in Ein Sinya in Binyamin from 1906-7, and the establishment of four towns in Gush Etzion prior to 1948, was seen as both a Zionist and security necessity, while the bravery of the defenders of Gush Etzion are revered by Israelis to this very day.

Israel’s victory in the Six Day War, gave Israel jurisdiction in this region for the first time since before the destruction of the Temple. For the next 10 years, only relatively minor communities were re-established on this historic Jewish territory. But then slowly but surely, Israel began to allow pioneering Israelis to establish new and robust communities to once again allow the Jewish people to reside and develop the land where their name derives from.

The State of Israel has been in control of Judea & Samaria for more than 50 years – more than the amount of time that the British and Jordan (combined!) controlled the territory.

WHY is Judea & Samaria necessary?

In 2005, Israel unilaterally withdrew from the Gaza Strip, expelled its Jewish population and destroyed all of the Jewish communities there.

Israel’s vacating of the Gaza Strip led to massive rocket fire on cities throughout Israel (including Jerusalem and Tel Aviv) in successive attacks orchestrated by Hamas, Palestinian Islamic Jihad and other terrorist entities.

As opposed to the Gaza Strip which is located in the southwest corner of Israel and offers no topographical advantage to threaten Israel, the mountainous range of Judea & Samaria reaches a height of 1,050 meters and dominates Israel’s population centers from Beersheva and Ashkelon in the south, to Netanya and Afula in the north, and Tel Aviv and Jerusalem in the center making the region ideal for launching missiles that would cripple the State of Israel.

Judea & Samaria is overflowing with many gorgeous and challenging trails that numerous books have been written about them including Maayanush - detailing the natural springs – and Maslulyosh – detailing the incredible hikes in the region. (The books – only available in Hebrew – can be purchased here.

Since hiking the land is one of Israel’s national pastimes, the national parks and trails in the region are national treasures.

Judea & Samaria is blessed with many natural resources such as underground aquifers that are used to provide water to millions of Israelis throughout Israel. This groundwater resource known as the Mountain Aquifer underlies the central mountain ridge stretching along a north-south axis for some 150 km through Israel and Judea & Samaria. To surrender these valuable assets would threaten Israel’s ability to provide safe water to its population.

Judea and Samaria (in Hebrew, Yehuda v'Shomron) is the proper name for the territory that Jordan occupied beginning in 1949 until it was liberated by Israel in 1967. Although it is disputed territory regarding the question of political sovereignty, it was included in the area of the historic Jewish homeland that was to become the Jewish state as decided by the League of Nations in 1922.

Why is it sometimes called the West Bank?

The term is not even geographically accurate as much of the so-called 'West Bank' is considerably closer to the eastern bank of the Mediterranean Sea than the western bank of the Jordan River.

The term is primarily used to disassociate the territory from Israel.

When did it start being called Judea & Samaria?

The terms Judea & Samaria date back to Biblical times and appear numerous times in the Old and also the New Testament.

In its 1947 partition plan borders, the UN used the terms Judea and Samaria. Prior to that we find the term in the writings of well-known authors, such as in Mark Twain's 1867 "Innocents Abroad" and Felix Bovet's"Voyage en Taire Sainte" published in 1864.

No. Jews were acknowledged by the League of Nations' decision to create the Mandate for Palestine. The Jews were to possess the right to settle and live in Judea & Samaria previously codified into the international conscience via the Balfour Declaration, the 1919 Versailles Peace Conference and the San Remo Accords of 1920. From 1949-1967, the region was illegally occupied by Jordan. Jordan prohibited Jews from living there after ethnically cleansing the areas of its Jews who had resided there in for centuries, until the region was liberated by Israel in its 1967 defensive war against Arab aggression.

International law does not recognize any country’s sovereignty over Judea and Samaria, and Israel has the most valid claim to the area: Turkey, the United Kingdom, and Jordan have all formally renounced any such claim. "Palestine" as a country has never existed. Only Israel has populated, developed, and administered the area for over the last 3000 years.

Despite its strong international law argument in favor of Israeli sovereignty, Israel has, for now, withheld annexing Judea & Samaria, recognizing that the international community considers the region 'disputed'.

Where is Judea & Samaria located?

The area encompasses the southern and northern suburbs of Jerusalem and those to the east of Tel Aviv and the Jordan River to its west. It includes Israel's central mountain range, and at 1,100 meters above sea level, it overlooks Israel’s largest population center in Tel-Aviv, as well as Israel’s only international airport.

How big is Judea & Samaria?

How many residents are there in Judea & Samaria?

Who governs the residents of Judea & Samaria?

Israelis who live in Judea & Samaria are citizens of Israel. They serve in the army, vote in Israeli elections and pay taxes to the Israeli government. Municipally, there are 4 cities (minimum of 20,000 residents), 6 regional councils (counties) and 14 local councils. Altogether, there are 185 different Israeli communities (cities, towns, villages, kibbutzim and moshavim).

The 98% of Palestinians in Judea & Samaria are governed by the Palestinian Authority (PA), pay taxes to the PA and vote in PA administered elections, if elections are held. The other 2% of the Arabs in Judea and Samaria reside in Area C.

Are there 'apartheid roads' in Judea & Samaria?

No. The roads that crisscross the region are open to both Israeli and Arab-Palestinian traffic. Since the PA issues their own license plates, it is quite obvious to any driver/passenger that the roads are open to all. A very few number of roads are sometimes restricted depending on the security situation that alternates.

However, in approximately 40% of Judea & Samaria that is under the control of the Palestinian Authority, it is illegal for Jewish Israeli citizens to enter or use those roads.

How much land has been developed throughout Judea & Samaria?

Approximately 17% of Judea & Samaria has been developed including all Israeli and Palestinian-Arab development. The built up areas of Israeli settlements cover around 2% percent of all West Bank land (StandWithUs
).